Construct your own unique BE Prepared plan

DALLASWHITE is featured on FOX 5 News

DALLASWHITE is featured in the US Builders Review

Integrity and guidance for clients in full-service restoration 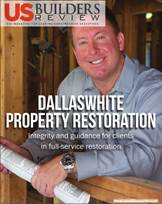 With 25 years of experience in construction management as a general contractor, Brian Whiteway decided he could do more than just new construction. In April 2010, he relocated west and launched DALLASWHITE Property Restoration, a general contracting company specializing in catastrophe solutions and property restoration. His goal was to create a construction company with a conscience. Headquartered in Las Vegas, DALLASWHITE also maintains offices in Southern California, but serves customers in need nationwide. Click here to view full article.

DALLASWHITE is featured in The Zweig Letter for its accomplishments in ranking #1130 on the 2015 Inc. 5000

Inc. 5000 recognizes DALLASWHITE as one of the fastest growing companies in the U.S.; their president attributes success to the company’s team.

The Inc. 5000 is an exclusive ranking of the nation’s fastest-growing private companies and DALLASWHITE Property Restoration (Las Vegas, NV), a 38-person national construction company specializing in property restoration and catastrophe solutions, recently landed on the list, ranking 1,130 with a three-year sales growth of 479 per-cent.The Inc. 5000 represents the most comprehensive look at the most important segment of the economy – America’s independent entrepreneurs. Companies such as Yelp, Pan­dora, Timberland, Dell, Domino’s Pizza, Linkedin, Zillow, and many other well-known names gained early exposure as members of the list. ” It is an absolute honor to be recognized in a class of distinguished business leaders who represent the top small businesses in America,” Brian Whiteway, DALLASWHITE’s president and CEO, says. Click here to view the full article.

DALLASWHITE performs the mitigation and reconstruction for the Sunset Beach fire 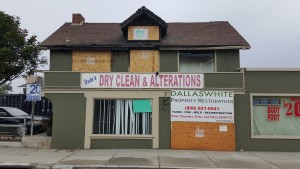 SUNSET BEACH, Calif. (KABC) –A dramatic fire broke out at a two-story building in Sunset Beach Sunday morning. Two people caught inside had to race to safety.
The fire sparked just before 10 a.m. on Pacific Coast Highway and Broadway. Witnesses captured the roaring flames on video. A man and woman inside an upstairs apartment smelled smoke and realized there was a fire, according to the Huntington Beach Fire Department. Click here to view video. 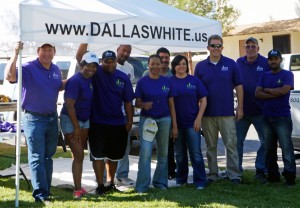 Earlier this month, Contractor Connection held its sixth annual Global Day of Service. As part of the event, affiliated general contractors and their employees from around the world organize volunteer projects in their communities and work together as a team to enhance their local areas. DALLASWHITE Property Restoration was among the many companies who volunteered their time and resources to help an organization in need. Click here to view the full article.

DALLASWHITE performs the mitigation and remediation for the Historical Ridpath Hotel 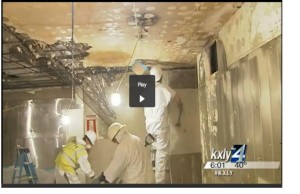 The redevelopment of the historical — and troubled — Ridpath Hotel has been delivered a setback. The hotel was supposed to be turned into apartments by June, but a leak dampened three floors and any hope of moving forward.

On the outside of the hotel everything looks the same except for the garbage chute. The garbage chute’s there because inside major demolition and cleaning are underway. The Ridpath is full of history but has a troubled past, and its latest problem only adds to that timeline. Click here to view video.

With over 25 years of experience in the industry, you can take comfort in knowing every aspect of your project will be professionally managed by our expert team. We will work with you through every phase of your project to ensure that we construct your vision in quality structures.

“The service was great and the team was professional. Neb, the project manager, Donny, the lead technician and Lamar, technician were all knowledgeable and wonderful.”

“Donnie was great to work with, as well as all of the DALLASWHITE staff. Thank you.”

“During my recent claim, I contacted DALLASWHITE Property Restoration to assist me for my damage. Their team provided prompt courteous service and made me feel very much at ease. Since I am 94, I was very glad to have this company here to help me in my time of need. I told them I would be happy to provide a recommendation.”

“Everyone here in Spokane representing DALLASWHITE is truly an asset to your company!”

“If one is so unfortunate as to be struck with catastrophe, they will be fortunate to have DALLASWHITE help them regain their “normality” and put their lives in order again. We were extremely satisfied!”

“I’m really satisfied with DALLASWHITE’s work. I will refer them to my family in the future.”

I am extremely happy with DALLASWHITE, with Chuck and all the workers, I mean I have never seen people that put their heart and soul into our process and it made us feel like they really take ownership of what they are doing. We have not one complaint about DALLASWHITE and we can’t imagine anyone would ever have a complaint and I know that usually that is always what you hear is the negative and complaints. We are just so delighted with the way things have come together and the way Chuck has stayed in contact with me and let me know whats going on and it just has been nothing but pure delight. We are just really really really happy, and give you all the kudos you all desreve so thanks so much, it has been such a pleasure and we will be spreading the word, thanks again to you and DALLASWHITE!

“I thank you for all you have done. Good help is hard to find but what’s even harder is finding people with integrity, and boy do you have it!”

“Your employee Charles Stephens was excellent. He spoke with much knowledge. I was lost with the work and was walked through it. Thanks DALLASWHITE!”

“Excellent customer service and professionalism. The guys were thorough and answered all questions perfectly. Thank you!”

October 26, 2017
To whom it may concern,
I highly recommend Dallaswhite Property Restoration to anyone in need of
restoring their home or place of business. My toilet broke and caused flooding in
my house from the second floor to the first floor. They had to remove several
walls and ceilings that were soaked. I had several sentimental value items and
collectibles that were damaged. I was overwhelmed and Dallaswhite Project
Managers Kent Riehm Sr. and Brant Hibbard guided me through the process,
from beginning to end. They made me feel better, eased my mind and my
expectations. They are professionals who gave me outstanding service!
The President and CEO Brian Whiteway came over my house to make sure that
everything was running smoothly from the very beginning while his crew was
helping me pack all my items and when the demolition started. He cared and I
really appreciated that.
The Dallaswhite crew and team are the best! From packing all my items, removing
the soaked walls and ceilings, and throughout the reconstruction process, I was
happy with the end results. They restored my house to its original condition. As a
homeowner, this is what matters the most. I love my beautiful home!
Sincerely,

“DALLASWHITE replaced our front porch and balcony.  Also repaired the roof on my historical Victorian home. I was very pleased with the crew of workers. They were polite, professional and always there when they said they would be there and finished the job ahead of their projected schedule.”

“Quick and there when I needed them!  Amazing service.”

“The service provided was extremely professional. The staff was courteous, polite, and caring. I recommend very highly.”

“Just sending a sincere thank you for the recent restoration of my home. Everyone from Mike Palmer to Charles Genter and all the crew, Randy and “Eagle Eye” Junior and others did a great job. I had a very sad incident with the issue of not only my home, but at the time my sister was ill and had passed away. Mike and Charles worked around this issue”.

“Very professional and accommodating in our busy schedule.”

“I would recommend Brian and DALLASWHITE to anyone who is in need of their services. I personally used them (Brian himself actually did the estimate) and have recommended them to clients who have had a loss and needed property restoration services. They are professional and knowledgeable in every aspect of the job.”

DALLASWHITE Is featured in the US Builders Review